MINNEAPOLIS — The Memphis Grizzlies didn’t act their age in this first-round series against Minnesota, especially when they faced a double-digit deficit — all three times — entering the fourth quarter.

With another relentless and resolute finish, the Grizzlies finished off the Timberwolves. Their next challenge is coming fast: the Golden State Warriors.

Desmond Bane and Dillon Brooks each scored 23 points and the Grizzlies rallied yet again to eliminate the Timberwolves, winning 114-106 in Game 6 on Friday night.

“I wish we got better starts so we don’t have to put ourselves in that predicament,” Brooks said, “but we’re always going to find a way to fight.”

Brandon Clarke added 17 points and 11 rebounds in another stellar effort off the bench for the Grizzlies, who withstood another quiet night by star Ja Morant and another double-digit deficit entering the fourth quarter.

“We stick together, stay on the same page, and I think it really showed on the big stage of this series,” said Bane, who led the Grizzlies in scoring the series.

The Grizzlies advanced in the playoffs for the first time in seven years, this time to meet Golden State, the NBA champions in 2015, 2017 and 2018. Game 1 is in Memphis on Sunday.

“Physically, mentally, this series was a battle,” said a visibly drained Morant, who went 4 for 14 from the field and had 17 points and 11 assists. “Obviously, the wins were pretty ugly outside of Game 2, but we got it done.”

Anthony Edwards had 16 of his 30 points in the first quarter for Minnesota. Jaden McDaniels had 24 points off the bench and Karl-Anthony Towns added 18 points and 10 rebounds, but the late-game struggles were evident again.

“We showed it in our shot selection in the fourth, and it’s baked in our DNA right now,” coach Chris Finch said. “We know we have to learn from this. We’re not all just going to be able to save the day.”

With the Grizzlies already the first team in NBA history to win multiple games in the same playoff series by erasing a double-digit-point fourth-quarter deficit, the here-we-go-again feeling was palpable in the building as an 84- 74 lead for the Wolves at the third-quarter break quickly vanished. 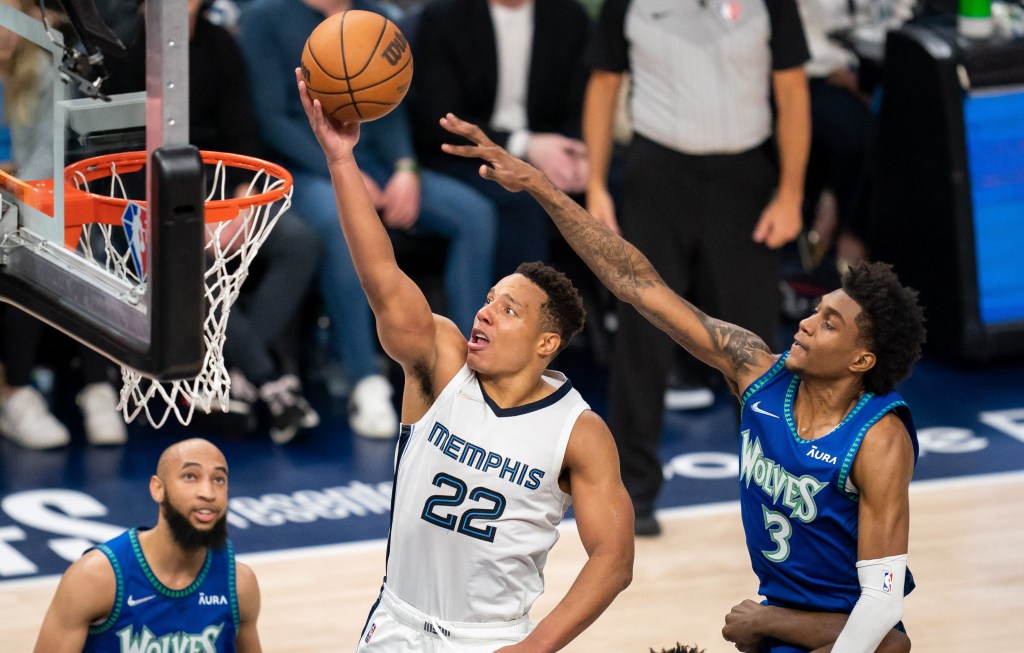 Desmond Bane, who scored 23 points, goes up for a layup during the Grizzlies’ series-clinching win over the Timberwolves. USA TODAY Sports

Bane and Brooks each hit tying 3-pointers midway through the fourth, and Brooks fouled out just 26 seconds after his evened the score at 97.

The kill shot came soon after for a Wolves team that, like so many others against the Grizzlies this season, was consistently a step and a jump behind on the glass.

Tyus Jones missed a pair of 3-pointers from the wing on the same possession, but the Grizzlies rebounded both — and Morant used the second one for a layup and a four-point lead.

After McDaniels, who had the game of his two-year career, hit a 3 with 1:34 left to bring the Wolves back within one, Jones — the former Timberwolves player and native of Minnesota — answered with a 3-pointer to bump the lead back to two possessions with 1:09 left.

Despite the devastation of the two squandered leads in defeat earlier in the series and the franchise’s untrustworthy history, the fans turned out again to give the Wolves a clear advantage.

Finch and Towns both clapped and waved at the fans as they walked off the court after the game in appreciation of the season-long support.

“How much this city, this team has given me, really made me enjoy basketball again,” Towns said.

Nagelsmann rules out sending Nianzou out on loan