The Donovan Mitchell Watch is officially on.

When Damian Lillard’s Blazers were bounced in the first round last spring by the Nuggets, there were indications Lillard would request a trade – possibly to the Knicks.

It never happened. Lillard stayed put and appears OK with the Blazers’ new blueprint and is no longer intrigued by New York’s plan, according to sources.

Now the focus will shift to Mitchell, the Jazz All-Star combo guard. The Westchester product and Greenwich, Conn. summer resident will start his offseason after his Jazz got bounced out in the first round Thursday night by the Mavericks in six games.

Mitchell, 25, has expressed frustration in the past with Utah’s failure to go further in the playoffs and with star teammate Rudy Gobert. The NBA – and Knicks – are watching closely. In fact, three members of Knicks brass, including recruiting chief William Wesley, sat courtside Game 1 of the Utah-Dallas series.

Mitchell was asked directly after Thursday night’s defeat if he wanted to stay with the Jazz.

Donovan Mitchell during the Jazz’s Game 6 loss to the Mavericks on April 28, 2022.Getty Images

“Yeah. Yeah, I think we were given a chance to win, I think we fell short of our goal. This hurts, I’m not going to lie,” Mitchell told reporters.

Mitchell was asked a different way about the rumors he might want to leave Salt Lake City.

“My mindset is to win,” he said. “Right now, I’m not really looking at that. I answered (the first) question, and you could take that. But for me, I just want to win, yo. Like, this hurts. And like I said, I’ll think about it in a week and go from there. But right now, I’m not thinking at all about that.”

Nothing definitive about wanting to honor the three years and $98 million left on his pact. Post Sports+ reported earlier this month that Dwyane Wade, a minority Jazz owner, could play a big role in whether Mitchell is content to stay in Salt Lake City.

Miami has been mentioned by league sources as a smart landing spot for Mitchell with Wade’s strong connections to his beloved Heat. However, Knicks president Leon Rose was Wade’s agent in the later stages of the guard’s career. Rose postponed his start with the Knicks to arrange Wade’s retirement ceremony in Miami.

According to an ESPN report out Friday, Wade and Utah majority owner Ryan Smith took a trip last offseason to Greenwich, Conn. to visit Mitchell a few weeks after their second-round exit to the Clippers to make sure his mind was right.

They may be towing to Connecticut again soon. Even if Mitchell wants a trade, Rose would have to also deal with one of the shrewdest dealmakers in the NBA in new Jazz CEO of Basketball Operations Danny Ainge.

Even if Mitchell wants to return home – his father, Donovan Mitchell Sr. works in the Mets front office and he’s also close with Knicks assistant Johnnie Bryant, formerly of Utah – Ainge will call the shots. The Knicks were better equipped to make a trade for a superstar last offseason when they had major cap space to fit in a contract the size of Mitchell’s. 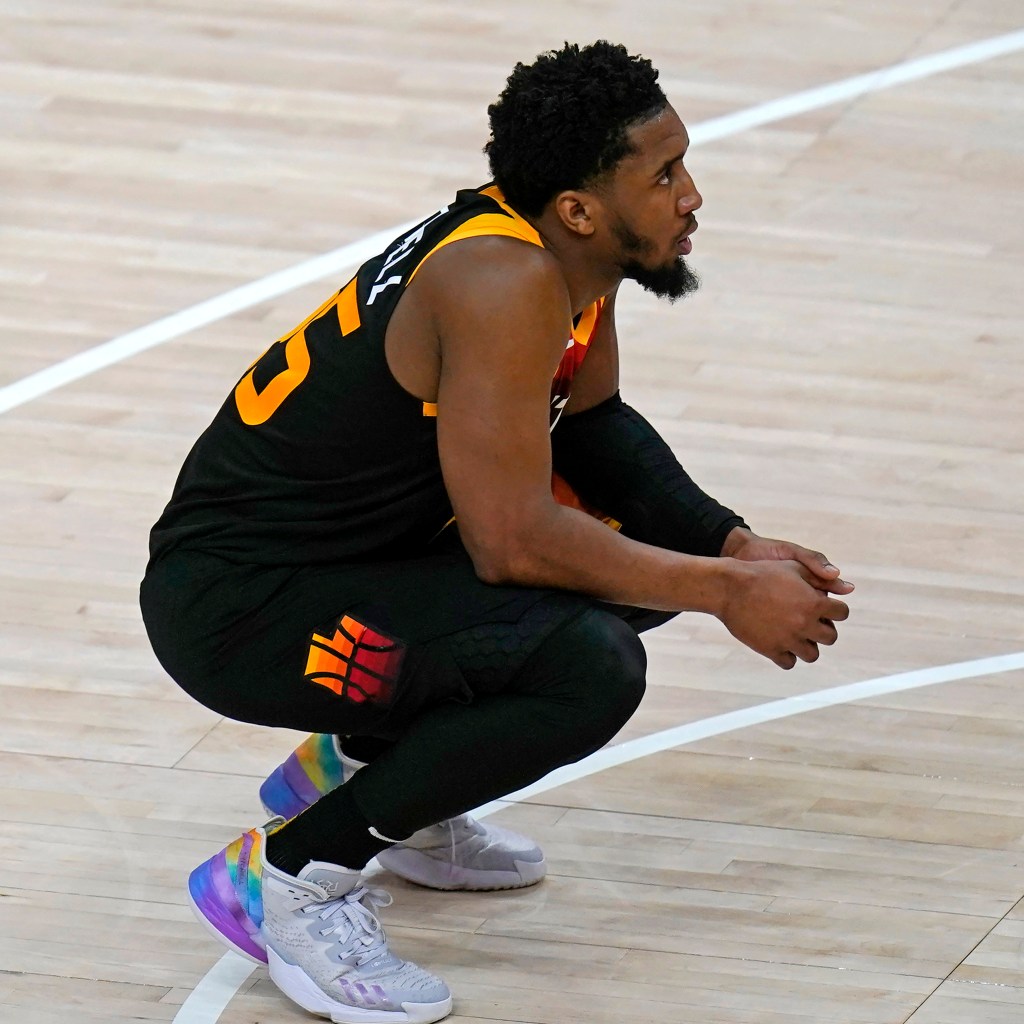 Mitchell reacts after the Jazz loss.AP

Without cap space, the Knicks might have to put together a hefty package — that works under the salary cap — of RJ Barrett, Julius Randle and Immanuel Quickley, along with their 2022 lottery pick and Dallas’ 2023 first-rounder.

To make such a deal, the Knicks have to be convinced Obi Toppin is a bonafide starting power forward and young Cam Reddish can fill in at small forward alongside Evan Fournier at shooting guard.

Rose is now talking up building through the draft and they can get below the salary cap in 2023. Even if they give a max contract extension to Barrett, the Knicks can be under the cap if they let the pacts of Derrick Rose, Alec Burks, Nerlens Noel and, of course, Kemba Walker, expire.

But on April 10 Rose said he will be “very flexible” when “an opportunity” arises. The opportunity might be knocking down the Knicks’ door shortly.

Leicester interested in Habib Diallo and Habib Diarra of Strasbourg