Obi Toppin still hasn’t earned the big minutes he has been seeking with the Knicks, but the 2020 lottery pick shined on the league’s national stage Saturday night in Cleveland.

Toppin emerged as the winner in his second try at representing the Knicks at the Slam Dunk Contest at All-Star Weekend, defeating Golden State’s Juan Toscano-Anderson in the finals despite no perfect scores of 50 from any of the four competitors.

Toppin had fallen short in the finals to Portland’s Anfernee Simons as a rookie last year in Indiana, but the Brooklyn native made good on his vow earlier Saturday to “represent New York” and execute creative dunks “that have never been done before.”

Toppin received scores of 45 and a 47 on his two successful dunks in the finals from judges Dominique Wilkins, Isiah Thomas, Clyde Drexler, David Robinson and Julius Erving. Toscano-Anderson missed all three attempts at his second dunk in the finals, essentially giving Toppin the title.

Due to COVID-19 issues, the dunk competition was switched to halftime of the All-Star Game one year ago, but it returned to the Saturday night showcase this year alongside the 3-Point Contest and the Skills Competition.

According to various betting sites, Toppin was considered the second favorite behind Houston rookie Jalen Green in a four-man competition that also featured Orlando’s Cole Anthony. 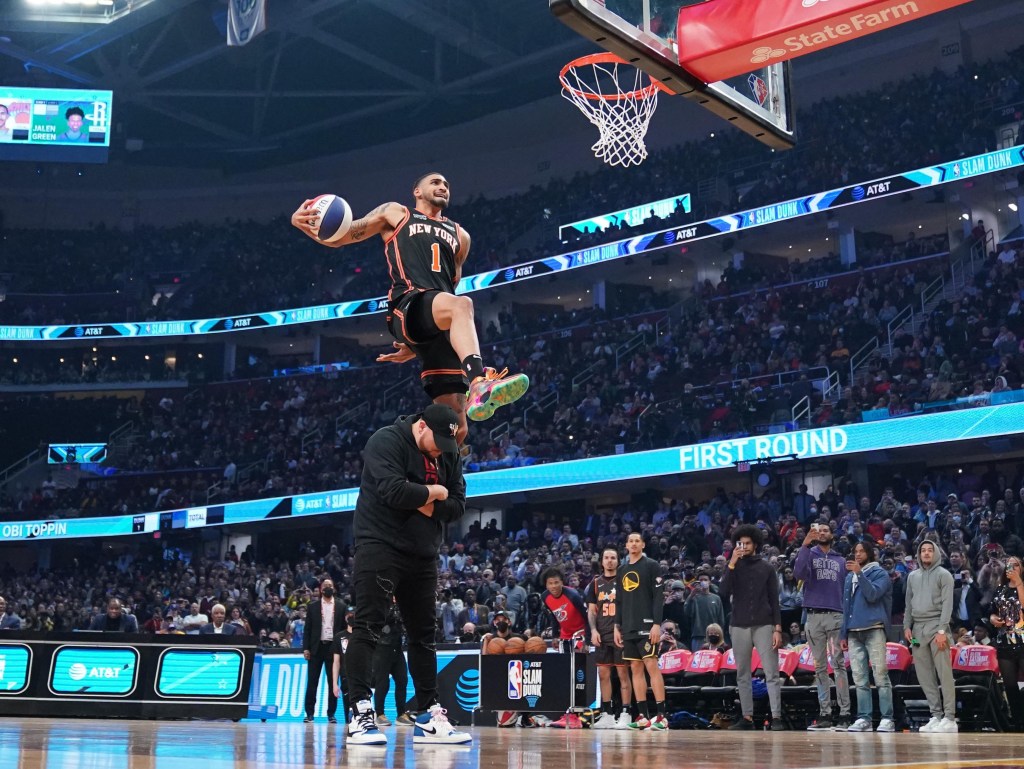 “Last year, I just getting out there and having an opportunity to be there, it was amazing. Even though it wasn’t a regular year, it was still a blessing to be in the position I was in,” Toppin said. “You just watch what everybody’s done and you just try to go outside the box and just create your own style and your own moves.”

Toppin, the eighth overall pick in the 2020 draft, and the other first-year and second-year players on the Knicks were bypassed for the Rising Stars showcase that took place Friday night.

The former Dayton star is averaging 7.3 points over 15.1 minutes per game for the Knicks this season, up slightly from his numbers (4.1 in 11.0 per appearance) as a rookie. But the 6-9 forward has often electrified the Garden with a series of acrobatic dunks, including a couple he threw down after shuffling the ball between his legs earlier this season. 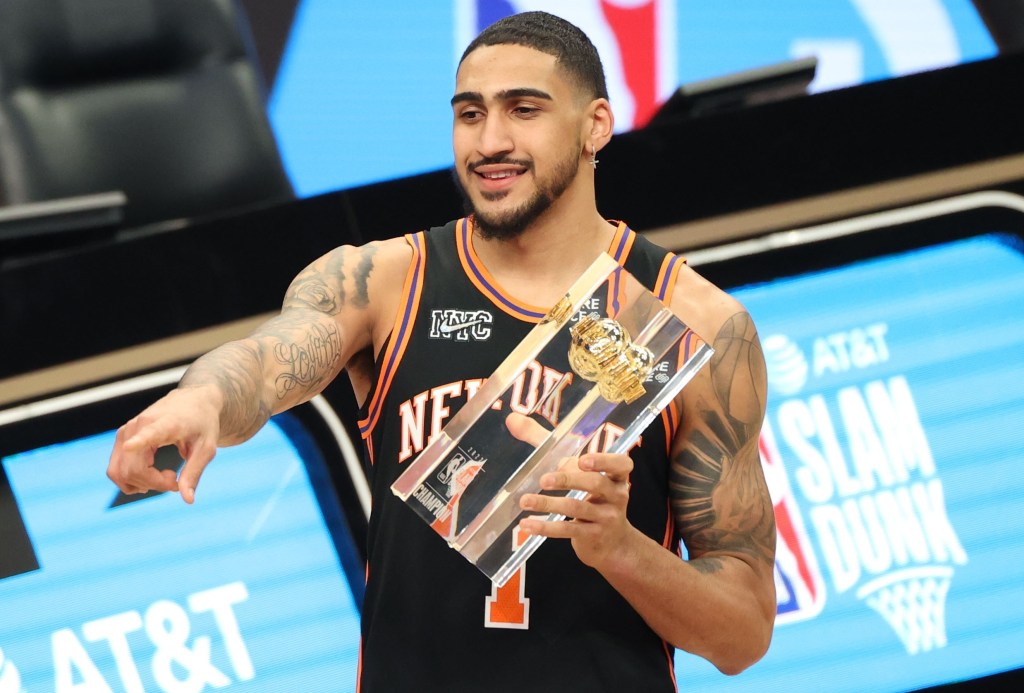 Toppin’s father, Obadiah, was nicknamed “Dunkers Delight” as a street-ball player from Brooklyn who played at such legendary spots as Dyckman Court, West 4th Street and Rucker Park. He also spent time playing in the defunct USBL. Toppin’s brother, Jacob, presently is a junior forward at Kentucky.

Toppin earned a 44 from the five judges for his first dunk of the opening round, putting the ball between his legs as he jumped over a male fan for a right-handed jam. Toscano-Anderson received the same score for a windmill dunk over 6-7 Warriors teammate Andrew Wiggins.

Anthony, the son of former Knicks guard Greg Anthony, had his father bring out Timberland boots and one of his old No. 50 Knicks jersey to wear for his first dunk. The 21-year-old Anthony grabbed the ball out of his father’s outstretched hand for a lefty windmill dunk and a score of 40, but he was eliminated after missing all three attempts on his second dunk.

The Skills Competition was won by the hometown Cavaliers trio of All-Stars Jarrett Allen and Darius Garland and rookie Evan Mobley.