Knicks choke away another huge lead in disastrous loss to Nets

The Nets believe they have turned a corner.

As for the Knicks, after the second half Wednesday, if there is another corner to turn, the stuck-in-neutral team can’t even see it.

The Knicks, who led by as many as 28 points, melted down in the second half to allow the Nets, bereft of all their stars, to pull off a remarkable rally at the Garden for a 111-106 victory, their second straight without James Harden and before Ben Simmons and Kevin Durant team up on the court.

In a matchup between teams without significant pieces during seasons of varying levels of disappointment, the Nets likely have bottomed out and are on the rebound. In a disastrous second half, during which their massive lead vanished, the Knicks are still searching for their nadir.

There are a lot of candidates for loss of the year, but the Knicks might have a new leader after being outscored 67-41 in the final 24 minutes.

The biggest possession began with the Nets leading, 106-103, and 49.9 seconds left. LaMarcus Aldridge bricked a jumper before Patty Mills missed a 3-pointer, but the Nets hunted down each rebound and eventually called timeout with 16 seconds remaining.

Cam Thomas, who scored 21 points off the bench, hits the game-clinching 3-pointer in the Knicks’ 111-106 loss to the Nets.Jason Scenes

The Knicks were outhustled, and then they were beaten. Cam Thomas, who finished with 21 points on 9-for-21 shooting, drilled a step-back 3-pointer with 7.7 seconds left to clinch the victory and humiliate the home team, whose fans headed for the exits.

The Nets, down 28 with 6:44 left in the second quarter and 21 at the half, scored the first eight points of the third quarter and used a 22-8 spurt to cut the gap to nine.

The Knicks got the lead back to 18 less than a minute into the fourth quarter, but the torrid final period from the Nets left them stunned.

The Nets ran off a 26-12 run in the fourth, punctuated by Thomas’ step-back jumper at 4:29 to tie the game at 97. After Evan Fournier missed a 3, Thomas pulled the same move to give the Nets their first lead of the game with 3:58 left. That step-back shot capped a 15-0 Nets run that spanned nearly four minutes. 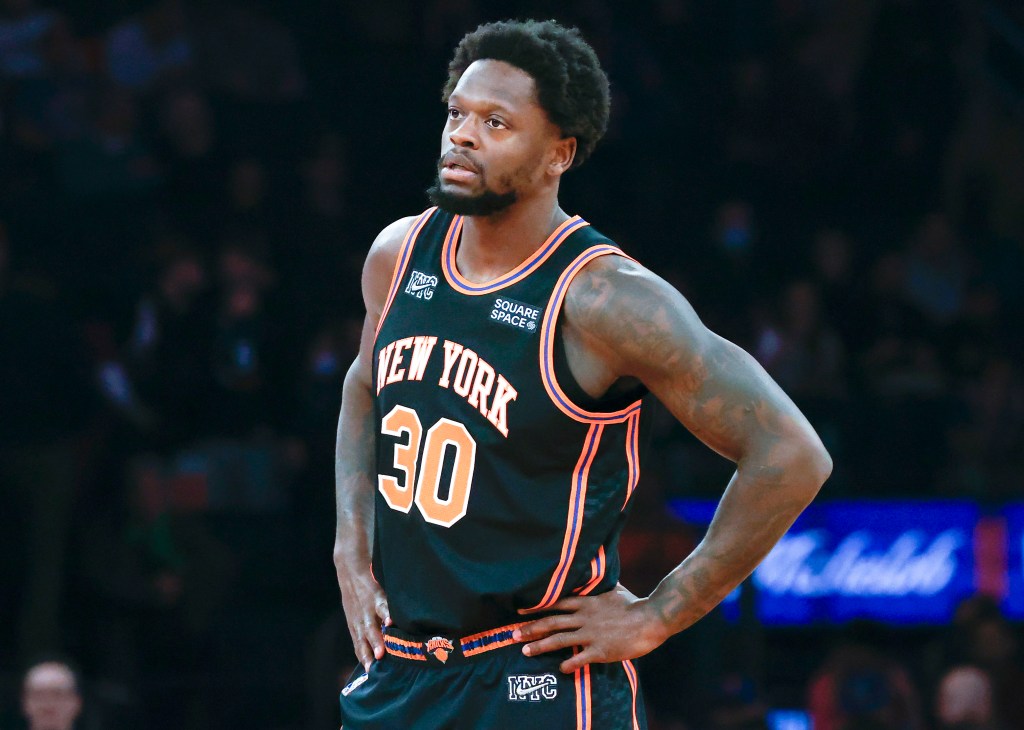 The Nets again got big contributions from the players it received from the 76ers in the Harden trade. Seth Curry had 20 points on 6-for-9 shooting from beyond the arc, and the 6-foot-10, 279-pound Andre Drummond was enormous in his second game since the trade, grabbing 19 rebounds and adding 11 points.

After their win Monday, the Nets credited a locker room in which “everybody likes everybody,” following the trade deadline deal that Harden sent to Philadelphia. Camaraderie certainly helps, though perhaps not as much as Simmons’ Nets debut and Durant’s return will.

The Nets had no Durant (knee), Simmons (working his way into shape), Kyrie Irving (unvaccinated) or Joe Harris (foot). Simmons is making progress, Durant could be back shortly after the All-Star break, and there is still the hope Irving will be allowed to play again at Barclays Center this season.

There has been a decreasing amount of hope around the Knicks all season. They had no RJ Barrett (ankle), Nerlens Noel (foot) or Derrick Rose (ankle), yet still jumped out to a huge lead on the backs of their 3-point shooting and Julius Randle, who had 31 points and 10 rebounds.

If there is hope for the Knicks’ season to turn, it begins with Randle. He was the last star standing and played like it in a tour de force first half, scoring 20 points before the break. (The Nets hit four 3s themselves in the first half.)

But Randle, who had averaged 29.3 points, 12.8 rebounds and 6.8 assists in his past six games, disappeared when it mattered. He went just 3-for-11 in the second half.

In all, the Knicks shot 32 percent in the second half, compared with the Nets’ 53 percent.

The numbers told part of the story. The shock looks on the Knicks’ faces was more illustrative.

No lead is safe for Tom Thibodeau's reeling Knicks