Let’s be perfectly clear about this: If the man coaching the Knicks this year was a first-time leap-of-faith hatched out of Leon Rose’s imagination — a long-time assistant, or a college coach making the leap — and the Knicks had played out this season exactly the same way, then the griddle under his seat would be up near scalding.

Let’s be even more clear: Tom Thibodeau has not done a good job this year. That is borne out simply by a record that sits at 25-33, and subtly by the in-game breakdowns he’s had across the past week, and maddeningly — to a lot of vocal Knicks fans — by his chronic stubbornness, whether with his sub patterns or his inability to coax the knicks into longer stretches of competitive basketball.

If this was his debut season, the skids would already be greased.

It’s been that bad.

But Thibodeau is no rookie. We have seen his work before. We saw what he did in Chicago, even after he lost Derrick Rose. We saw what he was building in Minnesota before that ran off the rails. Coaches of all philosophies and generations praise him voluminously. And, of course, we saw what he did last year with the Knicks. 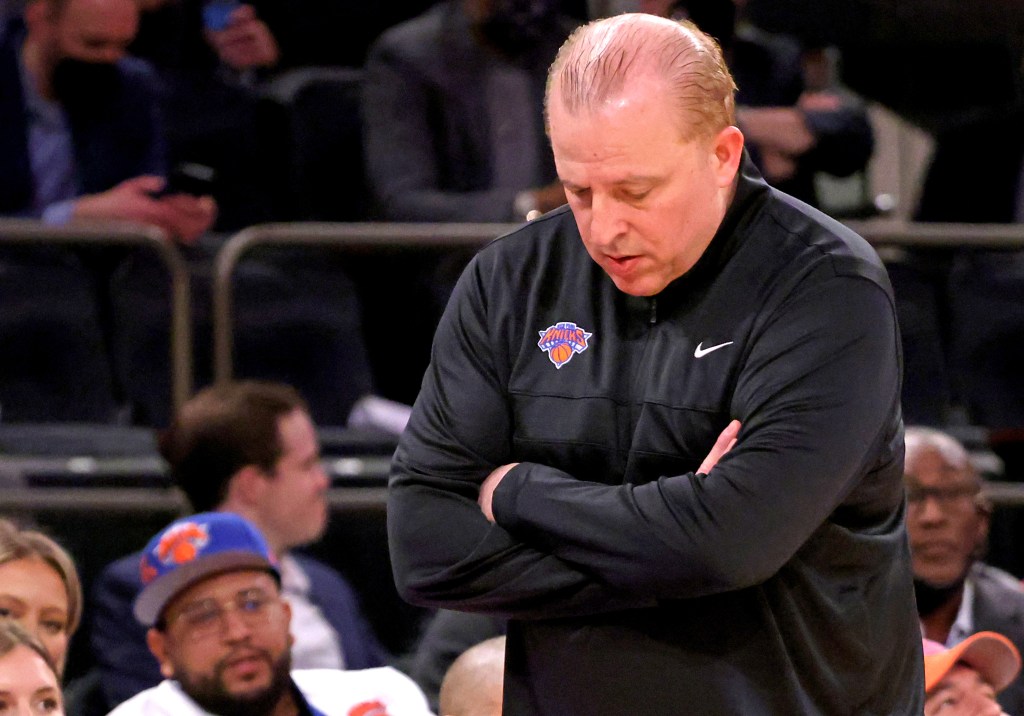 And that’s the key point here. We have a body of work with Thibodeau, one that has twice yielded Coach of the Year trophies, most recently for the 2020-21 Knicks. And you don’t have to worry that it was all a 72-game figment of your imagination. He had a team of grinders that bought in, completely, to what he was selling. Julius Randle and RJ Barrett took huge leaps forward on his watch. The city fell in love with the Knicks all over again.

You didn’t hallucinate that. It happened.

And for that — and perhaps that alone — any thought the Knicks might have of terminating their relationship with Thibodeau is premature at best, reckless at worst.

Has Thibodeau honored his hardware from last year? He hasn’t, and even he has copped to that. After botching the replay rule and costing his team a necessary timeout Monday night against Oklahoma City — a Coaching 101 foul-up of the highest order — he admitted: “I just lost my train of thought there for a second.” Barrett was hurt in the dying seconds of garbage time of a lost-cause game; that’s coaching 102.

Look, even the most successful coaches and managers do puzzling things sometimes. Joe Torre famously refused to order his players to bunt in Game 6 of the ALCS even as the world saw the blood oozing from Curt Schilling’s sock. Thirty years later, you want to know the easiest way to set Rick Pitino off? Ask him if he should’ve guarded the inbounds pass in the 1992 East Regional Final against Duke. Bill Parcells once called for a halfback option at the goal line with the Jets’ playoff hopes hanging in the balance.

And, by the way, went 6-10 with the 2004 Cowboys, a year after going 10-6 with them. He was 63 that year, and bounced back with winning seasons his last two years as a coach. Thibodeau is 64. Whatever the germ of the problems with this year’s Knicks may be, you can make book on this: Thibodeau hasn’t suddenly forgotten how to coach. Perhaps he needs to look in the mirror and ask himself if he’s able to make changes, hard changes, and adapt. But you have to believe a fierce competitor like Thibodeau has already started thinking about that.

The Knicks waited more than 20 years to locate a voice of competence that wanted to be here, and Thibodeau couldn’t have been better his first year. The sophomore slump is on him, yes, but also on a thick ensemble of co-conspirators. There is Leon Rose, who assembled a roster that, even early, seemed to run counter to Thibodeau’s strengths. There have been sinking performances across the board led by Randle, despite his latest renaissance. There were the two key summer acquisitions, Evan Fournier and Kemba Walker, who look like April Fools’ Day transactions more than the Fourth of July.

It’s not like you look at the Knicks and ask: What the hell happened?

It’s been on display every night. It’s right there, in living color, if ye can stomach the carnage. If the Knicks’ coach was a flailing rookie he might already be gone, and the Knicks would try to find a coach with a proven track record. Someone who looks an awful lot like Tom Thibodeau.

Or at least the version we used to know.