For the majority of Tom Thibodeau’s first season coaching the Knicks, he could do no wrong.

But over the past week, a rough seven-day stretch in what was already a tough season for him and his team, it seemed like the reigning coach of the year could only do wrong.

A stretch that began with Thibodeau leaving RJ Barrett in the game for garbage time last Tuesday, only for him to sprain his ankle and miss all three games since, sank further into a slump Monday with the coach admitting he “screwed up” by calling a second challenge he didn’t have and burning his final timeout too early in a costly fourth-quarter sequence.

Perhaps overshadowed by Barrett’s injury and Thibodeau’s late-game gaffe are the facts that the Knicks have also made a recent habit of blowing leads and their defense — which has been Thibodeau’s calling card throughout his career — has been sorely lacking more often than not.

The result is a 25-33 record, with 12 losses in their last 15 games and one game left before the All-Star break mercifully arrives.

“We just gotta fight. That’s it,” Thibodeau said in his postgame press conference Monday, which was oddly delayed before the lights briefly went out in the room during it, in a fitting scene. “When you get into where we are, you gotta fight. That’s our only option.”

The Knicks were known for their fight last season, Thibodeau’s first year at the helm in New York, when they overachieved and captured the fourth seed in the Eastern Conference. But the encore has gone awry, with time running out to turn things around this season.

It remains to be seen how much rope Thibodeau will get to still be the coach to lead that turnaround. The veteran coach, in the second year of a five-year contract, built up further credit with the strong job he did last season on the way to winning the NBA’s 2020-2021 Coach of the Year award. So, he counts Knicks president Leon Rose as his former agent.

But if the Knicks fall further into a tailspin, it’s not out of the question that change could be coming for a franchise that has churned through six head coaches (including interims) over the past seven seasons. Rose’s thinking remains unknown, as he has not talked to the media since mid-September, before training camp.

In the meantime, Thibodeau’s late arrival to his postgame press conference Monday night — he came after Julius Randle and Evan Fournier had already talked to reporters, explaining that he got caught up chatting with one of his coaches — raised some eyebrows. Thibodeau also spoke after players on Dec. 4, but he is normally the first to address the media. It was also curious that the Knicks canceled their practice Tuesday, after initially announcing they would hold one, before they play host to the Nets on Wednesday then head into the All-Star break.

The spotlight on Thibodeau only grew more intense Monday night. Just 28 seconds after wasting his challenge on Fournier’s reach-in foul, which was unsuccessful as replays clearly showed him hitting Thunder rookie Josh Giddey across the arm, Thibodeau called another timeout and motioned for a challenge of Quentin Grimes’ shooting foul. 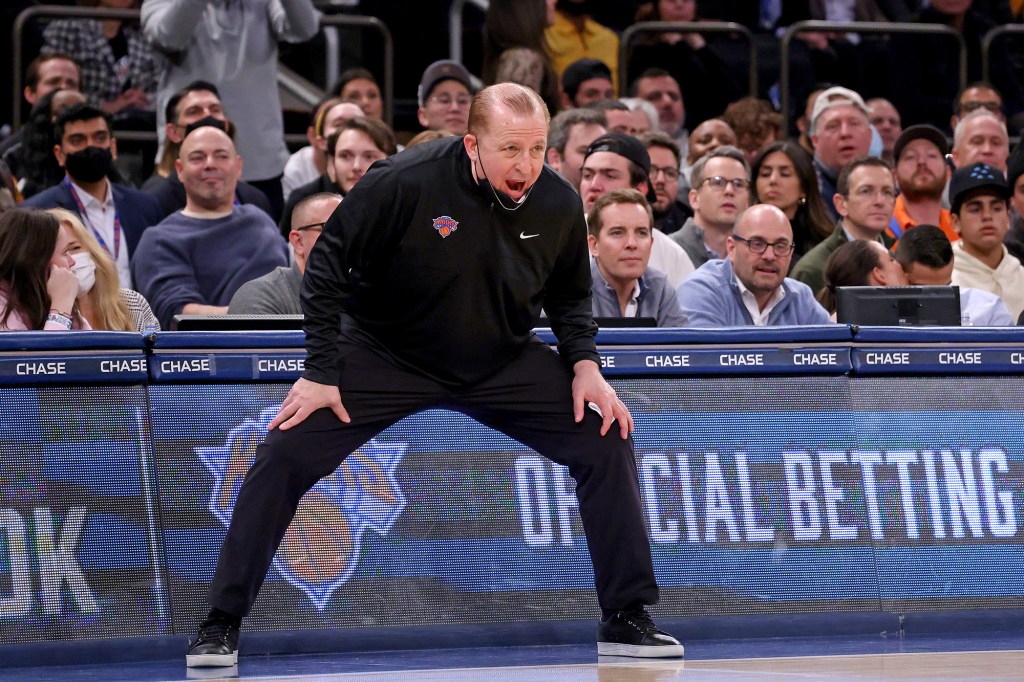 Tom Thibodeau has been making mistakes that are costing the Knicks.Charles Wenzelberg/New York Post

But Thibodeau had no challenge left to use, meaning he had wasted his final timeout with 39 seconds left. Moments later, when the Knicks couldn’t call timeout to advance the ball and draw up a potential game-winning play with five seconds left in regulation, it loomed large.

“I just lost my train of thought there for a second,” Thibodeau said.

The Knicks did have a timeout to use in the final seconds of overtime, when Thibodeau drew up a play that included an option for Immanuel Quickley, who is in the midst of a brutal shooting slump. But his clean look from beyond the arc for a potential game-tying 3 would not fall.

And so the Knicks continued meandering through their post-trade-deadline woes, now having blown double-digit leads in four of their last five losses — with a win over the warriors in between.

“We gotta finish better,” Thibodeau said. “We know that.”