As the Nets await a timetable for Ben Simmons to make his debut, the 76ers similarly will be absent James Harden for a while.

Harden, who had missed his final four games with Brooklyn with what the team termed a tight left hamstring, will not play until after this weekend’s All-Star break, the 76ers announced.

Harden, who practiced Monday for the first time with his new team, also will skip the All-Star Game — a game for which he was picked last by captain LeBron James because Kevin Durant refused to draft his suddenly former teammate.

By not attending, Harden surely would avoid some awkward conversations. Cleveland’s Jarrett Allen, the former Net, will replace Harden.

Harden will miss Tuesday’s home game against the Celtics and Thursday’s road game in Milwaukee. Following the break, Philadelphia plays in Minnesota on Feb. 25 — before a home-and-home set against the Knicks.

The Nets are scheduled to face Harden’s Sixers on March 10 in Brooklyn.

James Harden poses for portraits in his new 76ers uniform.NBAE via Getty Images

Harden is expected to be officially introduced in Philadelphia on Tuesday during a news conference that will include general manager Daryl Morey.

The Nets radically transformed at the trade deadline, but they did not make the trade that Nic Claxton feared: one including him. 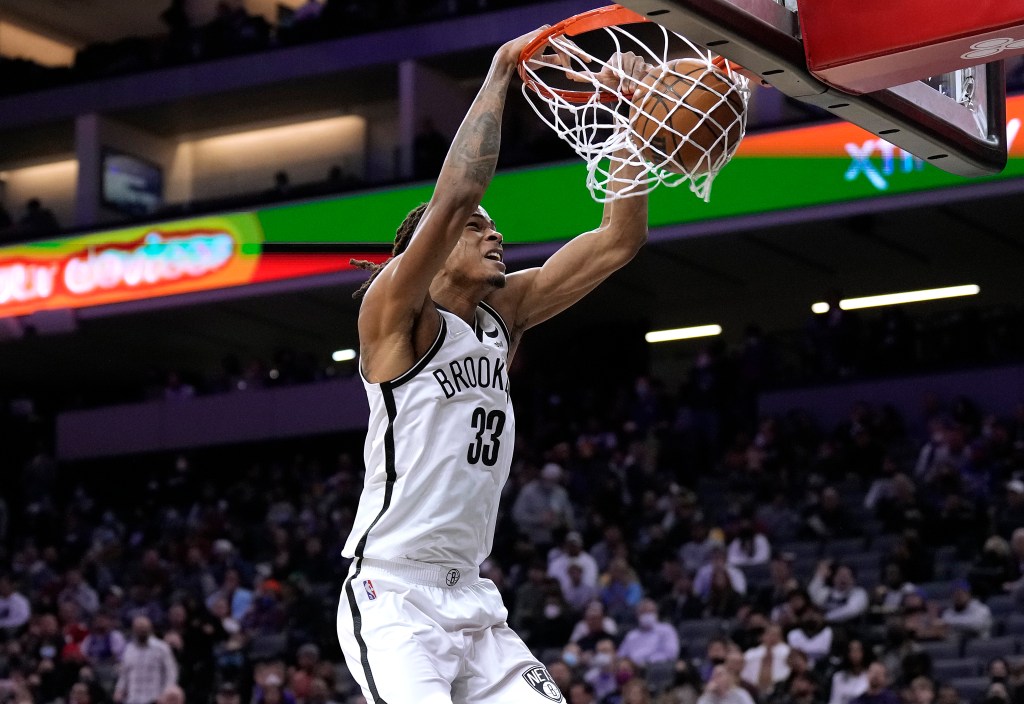 The third-year big man, one of the few attractive and inexpensive pieces the Nets had to offer, heard the rumblings and hoped for his phone not to ring.

“It was a roller coaster,” the 22-year-old said Monday before the Nets beat the Kings at Barclays Center, 109-85. “I didn’t know what was going to happen, it was all out of my control. But I’m happy I’m still here and moving forward for the rest of this year at least.

“Going to work for a championship and let the chips fall where they may.”

Claxton will be present, though how much he plays will be a curiosity. The Nets already were deep in the post with Claxton, LaMarcus Aldridge, Blake Griffin and Day’Ron Sharpe fighting for minutes, then they upgraded into landing two-time All-Star Andre Drummond.

Claxton, who was active after missing four games with a hamstring injury, did not enter the game. Drummond played 24 minutes and scored 11 points with nine rebounds and one big block of Sacramento’s Richaun Holmes.

“We have five centers,” coach Steve Nash said. “It’s very hard for them all to play. [Claxton is] going to have to be patient and see how we’re going.”

After the Nets loudly celebrated their victory in the locker room, Bruce Brown credited a “team-bonding event” in Miami, where they had fallen to the heat on Saturday.

“It was just good for us to be around each other, learn more about each other,” said Brown, who declined to elaborate on the experience.