MIAMI — Kevin Durant admitted the Nets were in “deep s–t” even before Saturday. But after a 115-111 loss in Miami — a league-worst 11th straight — the pile is getting deeper by the day.

Atop the East on Jan 22, the Nets have fallen all the way to eighth place. They’re 2 ½ games behind No. 6 Toronto and No. 7 Boston, whom they will host Monday.

And for the next four the Nets will be without Kyrie Irving, who had 20 of his 29 points in the fourth quarter as they cut a 21-point hole to one. Cam Thomas added 22, but when Kyle Lowry stole a pass between the two of them, it was the final nail.

“Moral victories are cool. You come in here — and kumbaya and stuff like that — but honestly it’s a game that goes to the person who has the strongest will and the team that’s most disciplined,” said Irving, after the Nets’ will had been found wanting.

Kyrie Irving, who scored 29 points, goes up for a shot during the Nets’ 115-111 loss to the heat.NBAE via Getty Images

It took a huge effort from Irving to claw Brooklyn back. Thomas’ 3 pulled them within 110-109 with 37.7 seconds to play, but Jimmy Butler answered with a layup.

After Irving sank two at the line, Butler made just one-of-two to leave the Nets one last chance. Until Lowry stole it. 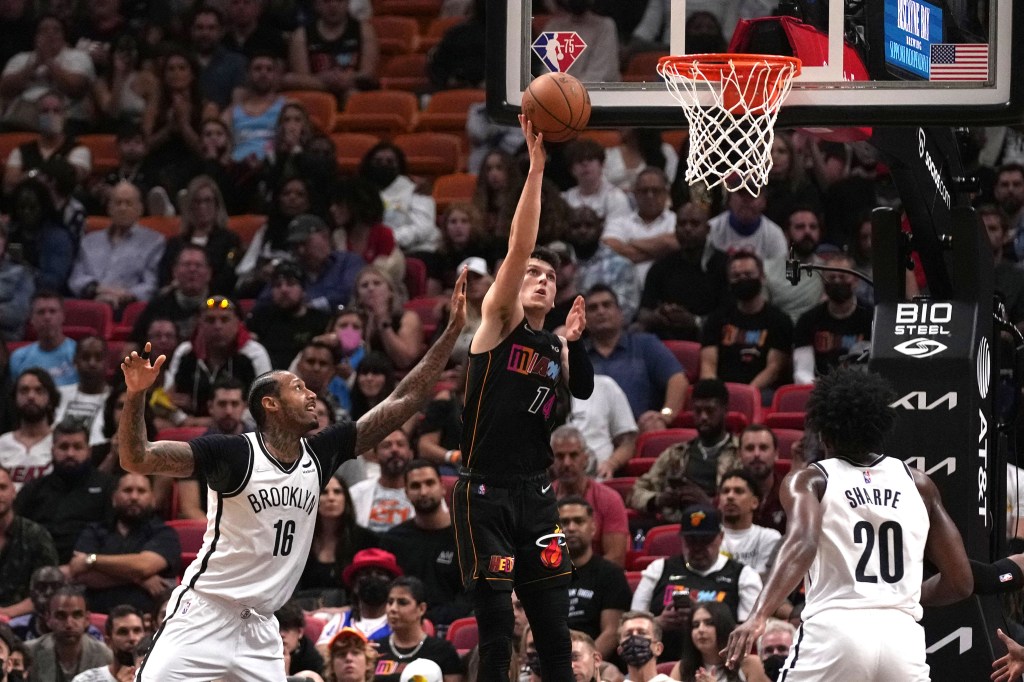 Heat guard Tyler Herro goes up for a shot during the Nets’ loss.USA TODAY Sports

“This one hurts for real. We’re on an 11-game losing streak,” said Day’Ron Sharpe (10 points, 12 boards). “We thought this was going to be the one we were going to pull it out. This next one we’re coming in with the mindset we’re winning no matter what.”

The Nets won’t have Irving for that next one vs. Boston, or at all until Feb. 26 in Milwaukee thanks to his unvaccinated status. When asked if he felt guilty for not being available, he bristled.

“There’s no guilt that I feel. I’m the only player who has to deal with this in New York City because I play there,” Irving said. “But because I’m there we have Eric Adams, we have the New York mandate, we have things going on that are real-life circumstances that are not just affecting me, bro.

“I don’t feel guilty. I’m just living my life as best I can, just like everybody else. … I didn’t have a plan in place when all of this was going on, didn’t know. The NBA and the NBPA made it very clear that there would be things that I’d be able to do to work around this, and that’s off the table.

“I still wish I could be out there at home. Some people say it’s as simple as go get this, go get the shot. It’s not as simple as that. … I’m still praying for a better outcome.”