Things could be worse.

The Knicks posted a victory on their five-game trip, were blown out just once and didn’t make a move to sell off assets and tank the season.

And Julius Randle, even if he wasn’t joining the team for the starting-lineup introductions in a new routine, was a beast, averaging 29.2 points. 12.8 rebounds and 6.2 assists.

But the 10-day trip ended 1-4 in a choke-filled disaster when the Knicks gave up a 23-point lead with 5:22 left in the third quarter and were outscored 56-24 the rest of the way by the Blazers fresh off their fire sale.

Randle found the positives because that’s the direction his season could be headed. And his reemergence means everything — as does Derrick Rose’s return after the All-Star break, possibly Feb. 25 versus Miami.

“Honestly encouraged in a sense of this was a tough trip,” Randle said before the Knicks’ redeye home from Portland late Saturday night. “We played some really good teams on this trip. We were in the game and really gave ourselves a shot to win four of the five games.

“It’s encouraging in that sense. But it’s also very disappointing that we were 1-4, easily could have gone 4-1. It’s tough. It’s tough. But for me it sucks, got a long plane ride back home.”

And now the Knicks must take care of business at the Garden before an All-Star Weekend Randle will not be part of.

The 12th-place Knicks (25-32) host rebuilding Oklahoma City on Monday and Wednesday face the undermanned Nets who won’t have Ben Simmons, Kevin Durant or Kyrie Irving. (Though the Knicks game is a road show, Irving can’t play because he refuses to get vaccinated.)

The Knicks are just two games out of 10th place — which is good enough for the play-in event.

Tom Thibodeau’s club looked gassed in the fourth quarter Saturday as the Blazers furiously came back to win. Randle logged 41 minutes and had nothing left in the final stages.

Center Mitchell Robinson had left with an ankle injury in the third quarter and Thibodeau refused to put in Obi Toppin, who played six scoreless minutes and is back in the coach’s doghouse.

“Obviously, it just wasn’t a really good trip for us,” said Kemba Walker, who had one of his best games with 23 points but got benched in the fourth quarter for defense.

Indeed, it was a poor fourth quarter for Thibodeau, already guilty of letting RJ Barrett stay on the court with 18 seconds left in the Denver blowout when he sprained his ankle. Barrett has missed the past two games and may not be back until after the All-Star break the way he was still limping about in Portland. 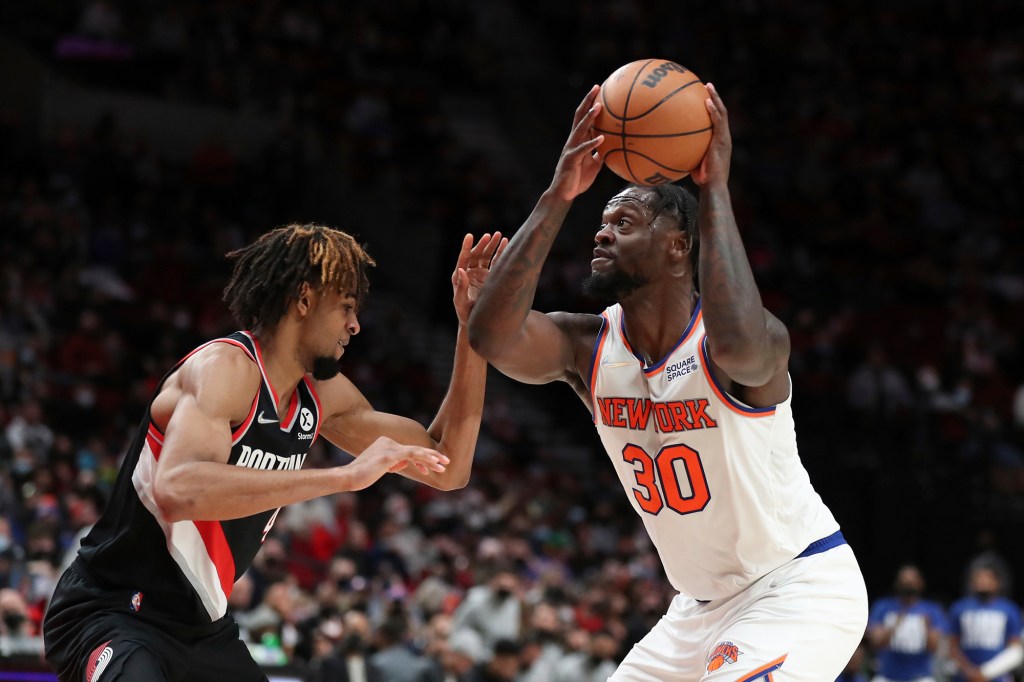 After the Knicks were outscored 35-11 in the fourth quarter Saturday, Thibodeau questioned the team’s toughness in not fighting through fatigue. He was irritated at their inability to rebound in the final frame and may have taken a shot at Evan Fournier (1 of 13 from the field) for not playing on both ends of the court because his shot wasn’t falling.

“If one guy is choosing not to do [defense] — even if it’s not going his way — then it’s gonna hurt the group,” Thibodeau said.

“It’s not to make excuses. If we’re small, we need everyone fighting for rebounds and gotta find a body on a shot. So, just get it done.”

Knicks president Leon Rose got nothing done at the deadline, but he filled his last roster spot by bringing back former Villanova point guard Ryan Arcidiacono.

That could trigger a Walker buyout if there is an appealing player that crops up on the buyout market. There’s even been talk of point guard John Wall being bought out by Houston despite his massive long-term contract.

For now the Knicks need these two games before the break and then pray the other Rose — Derrick — saves their season.