PORTLAND, Ore. — Julius Randle has found a new, unconventional way of preparing for tip-off at road games — and it’s not being political or dissing his Knicks teammates.

It’s just about more stretching. And it’s working. Randle has played out west like the All-Star he was last season.

During the first four games of the five-game Western trip, The Post has observed that Randle has been in the back near the locker room during the playing of the national anthem while his teammates have been lined up on the court.

In addition, in the last three games, at Utah, Denver and Golden State, Randle has stayed back and missed the traditional introductions of the starting lineups.

When Randle’s name has been called, he has been absent. In each city, Randle emerged while the home team was being introduced, but he bounded onto the court energetically, fist-bumping and engaging with several teammates.

Julius Randle stretches prior to a Knicks game. NBAE via Getty Images

In the four games, Randle played with a lot more hustle and less bad body language — outside of that computer altercation with a Knicks assistant.

So nobody is complaining about this unorthodox manner of being late onto the court if it’s his way to stay limber and get off to fast starts.

Randle is trying to push the pace to get easy baskets, and this is perhaps a strategy to get his blood pumping before tip-off.

Across this disappointing season, the Knicks’ starting five have habitually gotten off to slow first quarters.

The NBA has a policy that players must appear for the national anthem, but it is not enforced. Randle is always present at the Garden for both the anthem and player intros but has missed some road anthems in the past.

(Nerlens Noel, the backup center, occasionally misses the anthem to warm up, as do assorted other players around the NBA.)

As Randle goes, so go the Knicks. And right now, there’s optimism the upset win over the mighty warriors can turn the season around after brass stood pat at Thursday’s trade deadline.

The Knicks stood at 25-31, in 12th place — two games out of the play-in tournament. They can finish the five-game trip 2-3 if they beat the lowly Trail Blazers on Saturday. 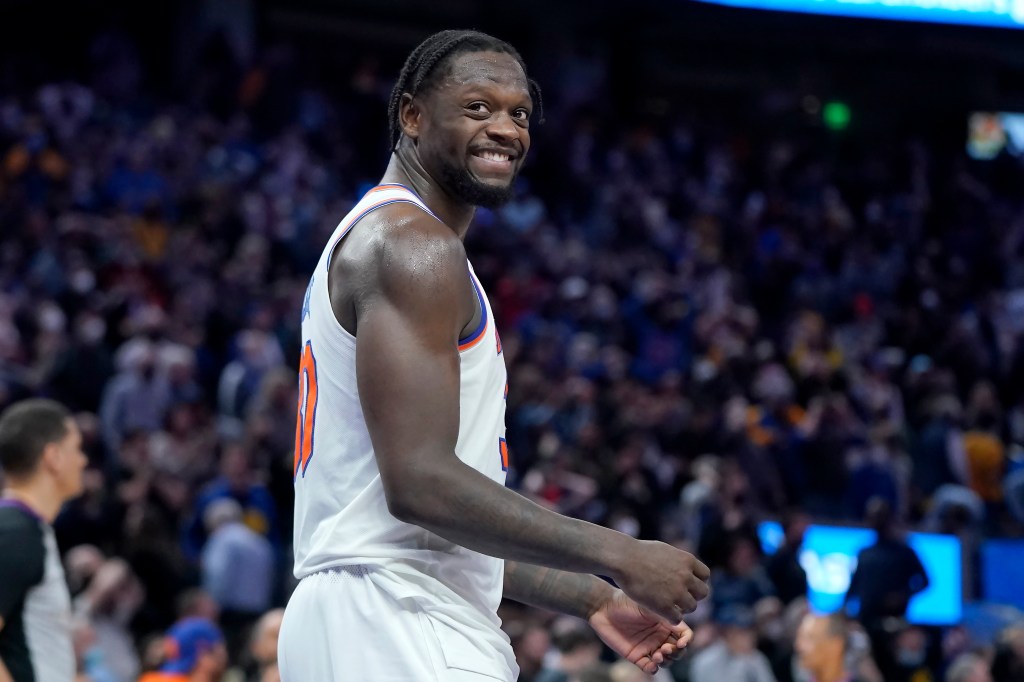 Julius Randle has looked like his old-self during the Knicks’ road trip. AP

Subject of trade talk, Randle has primarily faced double teams in the halfcourt.

“I just had to adjust to the way the game was being played, and adjust to how we were trying to play,” Randle said. “We’ve been playing up tempo all year and haven’t really been able to figure it out. For me, it was a conscious effort watching the game, watching the other teams play and making that adjustment myself.”

“I think that could be said for the whole team, and he drives it,” Thibodeau said of Randle’s faster pace. “When he plays like that, and we’ve said it all along, it drives the team. we [can] play with pace in transition but also pace in the halfcourt.” 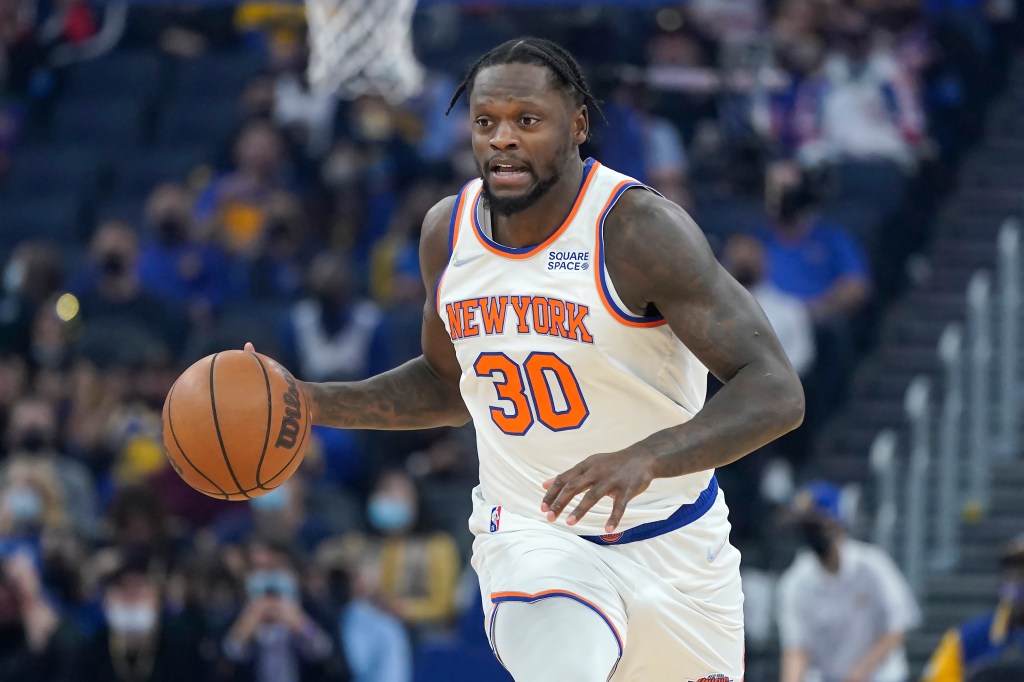 Randle’s connection with shooting guard Evan Fournier also is critical. They combined for 50 points in the Warriors’ stunner. Randle had solid chemistry with the departed Reggie Bullock, but hadn’t yet solidified a bond with Fournier.

But they’ve been collaborating on strategy recently. With the trade deadline passed, they will be teammates for the rest of the season — and perhaps a lot longer.

“He’s been doing that [playing with more pace], but I think he just does it more consistently,” Fournier said. “The one thing he did change though, and he did start it about six games, it’s when they switch, especially with me. … He’s rolling so I can always hit him with like a little hip pass, and that opens up the whole court for him to either shoot, or just drive-and-kick, or make a play.” We have a really good relationship. We are just trying to figure out ways to make things work in our two-man game, because Jules likes to go to his left, obviously, and I’m always in the left corner. So we have to find ways to create offense to get us easy buckets.”

Randle said he was barely conscious of the trade deadline and was having lunch in San Francisco with his wife Kendra as it passed.

“I don’t really sense anybody being tight or being worried,” Randle said. “We got a lot of veterans on this team.”