The NBA’s biggest blockbuster of the season, maybe of the decade, maybe ever, went down Thursday as the Philadelphia 76ers traded Ben Simmons, Seth Curry, Andre Drummond and two first-round picks (protected) to the Brooklyn Nets for James Harden and Paul Millsap.

The deal brings to a close one of the messiest and longest dramas in NBA history as Simmons heads to Brooklyn. The Nets now add a defensive player of the year candidate with superb athleticism and playmaking ability but of course a devastating liability in shooting.

Here are two takes on the deal.

Moore: Almost as important given the uncertainty around Simmons, who hasn’t played in eight months, are the draft picks, which allow Brooklyn to pursue future upgrades to the roster.

The Nets get return on value, Simmons’ potential as an answer for their defensive issues and Curry as a top-end shooter next to Joe Harris (who may miss the rest of the season) and Patty Mills. It’s not clear at this time if the Nets intend to keep Drummond or buy him out.

Ben Simmons is being treated for a back injury as he pushes for a trade away from 76ers.Robert Sabo

Philly adds Harden, a top-level scorer and playmaker — when healthy and engaged — who comes with questions about whether years of heavy usage have diminished his ability to impact the game at his former MVP level, and a true star next to Joel Embiid. The Harden Embiid pick-and-roll will be deadly, especially with Embiid stopping to pop at 18 feet.

Don’t be surprised if Harden suddenly plays himself into shape and looks more motivated. The rumors and reports of his unhappiness with Brooklyn were widespread. This is where Harden wanted to go.

Nets odds moved longer at BetMGM to +425 after the trade, then immediately shifted back to 7/2 while Sixers odds shortened to 11/2. The Nets now have a 22 percent implied chance at the title (which definitely has some expected value with Kevin Durant expected back) while the Sixers move to 15 percent.

Both teams improved in this trade, solving major problems with stars who wanted out. 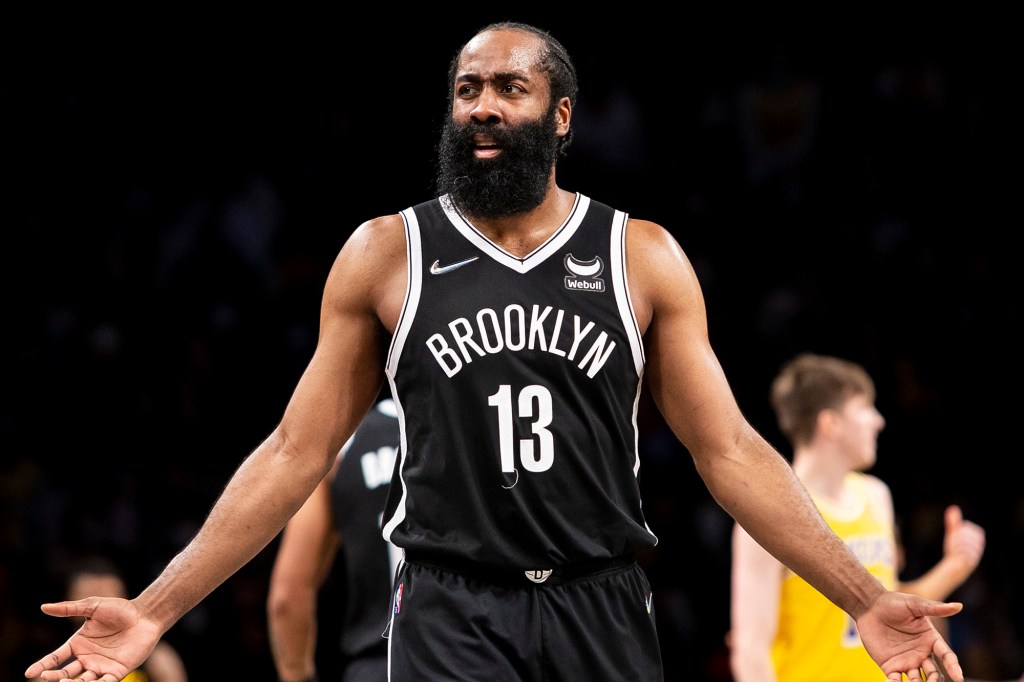 Palmer: On the surface this feels like a good deal for the 76ers. A few months ago it appeared the 76ers had no leverage in trading a disgruntled Simmons who was sitting out this season to facilitate a trade.

The 76ers now gain a top 10-15 player in Harden in exchange for Simmons, who wasn’t expected to net a player better than Malcolm Brogdon. However, Harden seems to be on the decline since suffering a hamstring injury last season.

This year he’s seen his production dropped to levels we haven’t seen since he came off the bench in Oklahoma City, averaging 22.5 points on 41.4 percent shooting and 33.2 percent from behind the arc, the lowest of his career. When you factor in that Harden is a free agent this summer and they will have to pay $200 million for a star with a ton of mileage, it seems the 76ers’ window could be this year only.

Harden could very well return to form and if he does, he’s certainly a worthy addition to a 76ers team which lacked perimeter scoring and playmaking but his fit with Embiid could be clunky even if he’s healthy.

With the 76ers also giving up Drummond, Curry and two first-round draft picks, it feels as if the Nets got the better of this deal as it gives them a better interior presence, playmaking and shooting which could give them a legitimate chance at winning the East.