Arsenal have terminated Pierre-Emerick Aubameyang’s contract with the striker now set to be unveiled by Barcelona on a free transfer – though the deal will not be confirmed until Tuesday.

The Gabon international enjoyed a prolific career in north London, netting 92 goals in 163 appearances, and was handed a lucrative new contract in the summer of 2020 which made him the highest-paid player at the club.

But, after the latest in a long line of disciplinary issues, Aubameyang was stripped of the Arsenal captaincy by manager Mikel Arteta at the end of last year and banished from the squad.

The 32-year-old has not played for Arsenal since a 2-1 defeat away to Everton on December 6, when he came off the bench late on, and that will be his last ever appearance for the Gunners.

Although neither club have officially confirmed the deal, Aubameyang was at Barcelona’s offices where he smiled and laughed when asked if he would be joining Barcelona before giving a thumbs up to the cameras.

Because Arsenal have terminated his contract, the deal did not have to be completed prior to Monday’s 11pm deadline and Barca are expected to officially confirm Aubameyang’s arrival at an unveiling on Tuesday morning at 9.30am.

Arsenal and Barcelona had initially been in talks about a loan move for Aubameyang, with the former Dortmund frontman even flying to Catalunya of his own accord to help push through the move.

However, the deal appeared to be on the verge of collapse on Monday afternoon when the Gunners made it clear they would not be prepared to subsidize the striker’s wages, with Barcelona unable to pay his full salary – which is a base fee in the region of £250,000-a-week.

Pierre-Emerick Aubameyang contracts have been signed and then also on Arsenal side to terminate current deal. ðŸ“’ðŸ”´ #FCB

Official in the morning. ðŸ¤ pic.twitter.com/vrk9zcoXS3

But in the evening the nature of the deal had changed after Barcelona suggested a free transfer, something Arsenal were happy to agree to as they will save around £29million over the next 18 months by getting his salary off their books.

Arsenal agreed to terminate Aubameyang’s contract before 11pm, meaning he is free to complete his move to Camp Nou after the transfer deadline, and the player himself is believed to have taken a significant pay cut. 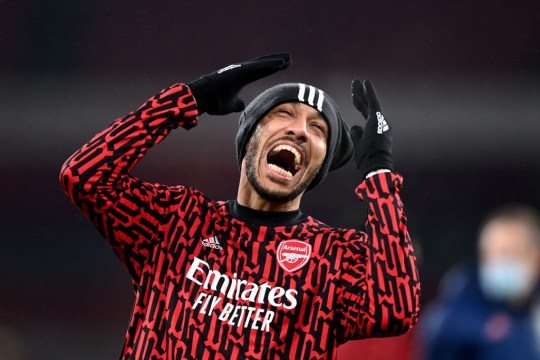 The striker will be unveiled at Camp Nou on Tuesday morning (Picture: Getty)

Aubameyang has signed an initial six-month contract until the summer – with some suggestions that Arsenal could contribute during this period – with Barcelona having the option for an additional year which they will pay in full themselves.

Although the deal has been agreed – with Barcelona president Joan Laporta even seen fist-pumping – official confirmation will not arrive until Tuesday morning.

Barcelona had been desperate to bring in more attacking firepower this month after Sergio Aguero retired, though the move leaves Arsenal – who failed to bring in a new forward this month – light on options up top with just Alexandre Lacazette and Eddie Nketiah at Arteta’s disposal.

MORE : Arsenal send youngsters Jordi Osei-Tutu and Tim Akinola out on loan for the rest of the season