Nets’ James Harden out with injury as trade rumors swirl

The only sure things at the NBA trade deadline are Twitter spreading misinformation and teams pushing disinformation, as multibillion dollar franchises engage in a game of high-end chicken.

Watching the James Harden drama unfold is the epitome of that.

As trade rumors swirled around him, Harden sat out his third straight game Tuesday against Boston. Or some would contend he was held out.

Harden’s left hamstring tightness cropped up at the same time as reports of Philadelphia’s interest in the All-Star heated up. Brooklyn has publicly and privately told everybody who will listen that it is confident of contending once it gets its Big 3 healthy, while the 76ers They’re willing to keep Ben Simmons for years unless given a king’s ransom.

Coach Steve Nash had insisted last week that the Nets weren’t trading Harden, and asked before Tuesday’s Celtics game whether Brooklyn would look different after Thursday’s 3 pm trade deadline, he said it wouldn’t.

“No, I mean, honestly I think we will be exactly the same,” Nash said. “I think the chances of trades or deals happening before the deadline are so slim, especially for our group.

“So my mind and attention is on this group, putting this thing together as guys become healthy again and trying to build up for the stretch run so that we can continue to improve, but also find that cohesion [before] the playoffs given that we have limited time now by the time Kevin [Durant] comes back, James gets healthy, hopefully we see more of Kyrie [Irving] and you go down the line.”

It’s not that either team is lying. It’s that failing to shape the narrative is flat-out malfeasance, and Brooklyn GM Sean Marks and 76ers president Daryl Morey aren’t in the failing business.

Marks’ biggest task might be appropriately judging not only Harden’s commitment to Brooklyn (after rejecting a three-year, $161 million extension to put himself in position for free agency this summer) but also his future (now 33 and in the midst of his worst offensive season in a decade).

Once he assesses those — and he can’t afford to be wrong on either — he has to judge Harden’s worth relative to the 76ers’ roster. Any trade would be centered around Ben Simmons, but out of all the potential sweeteners Marks could demand (Seth Curry, Matisse Thybulle, picks, etc.) it’s apparently Tyrese Maxey that he truly covets.

The Philadelphia Inquirer reported the Nets want Maxey in any deal, but that the Sixers are adamant about holding onto the rising 21-year-old point guard. But the feeling is that the Nets have more leverage, at least at the moment. 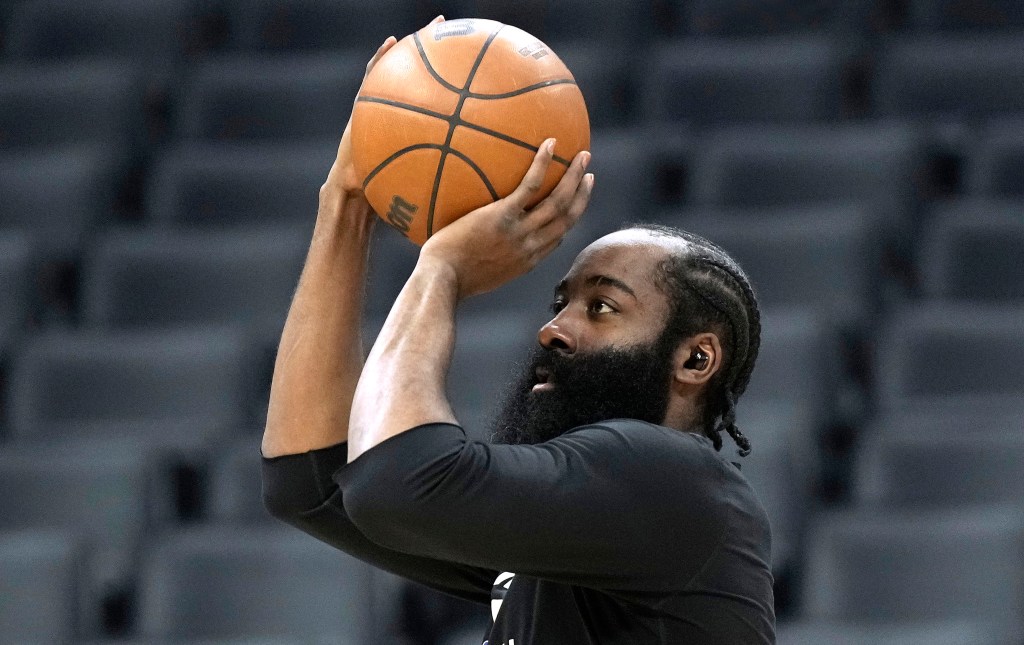 Though Harden’s litany of ties in Philadelphia — from Morey to 76ers CEO Tad Brown and minority owner Michael Rubin (CEO of Fanatics) to rapper Meek Mill — buoy the 76ers’ confidence of forcing a sign-and-trade in the summer, they’d have to open up about $76 million in cap space to do so.

That would necessitate moving Tobias Harris, the Long Island native in Year 3 of a five-year, $180 million contract. And even if Morey pulls off all those machinations and forced a sign-and-trade, the Inquirer reportsx several NBA teams are likely to trigger a tampering investigation involving Rubin and the 76ers.

Despite players such as CJ McCollum, Tyrese Haliburton and Domantas Sabonis all being dealt, the belief in league circles is that Philadelphia is all-in on Harden, be that by Thursday or in the summer.

It strains credulity to think Harden’s absence and poor recent play has nothing to do with the trade rumors and reported unhappiness, but Nash said the All-Star still isn’t ready to go through a full shootaround much less play.

“He didn’t really go through shootaround. He was here with his teammates,” Nash said. “He’s still doing strengthening, he’ll do core work, but taking the wheels off and exploding is still something he wants to cover.

“When he shoots, he looks like James, but as far as changing ends and accelerating and all that stuff, he’s being conservative right now to continue to regain that strength. There’s a deficit right now, just to be safe and look long term there’s no point in us risking a big patch of the season to be back where he was last season for long stretches.”