Some of the differences are strong, and simple. The Knicks played their 54th game Monday night at Salt Lake City’s Vivant Arena. They suffered their 30th loss, 113-104. A year ago, it took all 72 games for the Knicks to reach 31 losses.

So there’s that, as subtle as a two-by-four to the skull.

But there’s also this: a fourth quarter that, start to finish, illustrates why last year’s Knicks were an agent of hope and of change and this year’s version is something else. At best, they are simply a placeholder to something else and something better. At worst? They will be one more unforgettable acre of yarn in a string of lost seasons that, with only occasional interruption, dates back 22 years.

We thought we were past that with the Knicks.

We were a bit premature believing that, it turns out.

“There’s such a small difference between winning and losing,” Knicks coach Tom Thibodeau said after the Knicks dropped their second straight on this road trip, their third game in a row and their sixth in the last seven. “Every team is different, each game you have to concentrate on getting better. We’re falling short of that now. It’s got to improve.”

More and more last season feels like a mirage, a figment of a starving basketball city’s imagination. This is precisely the kind of game the Knicks would have figured out a way to win last year. The Jazz were missing Rudy Gobert. They’ve been scuffling themselves the last few weeks. 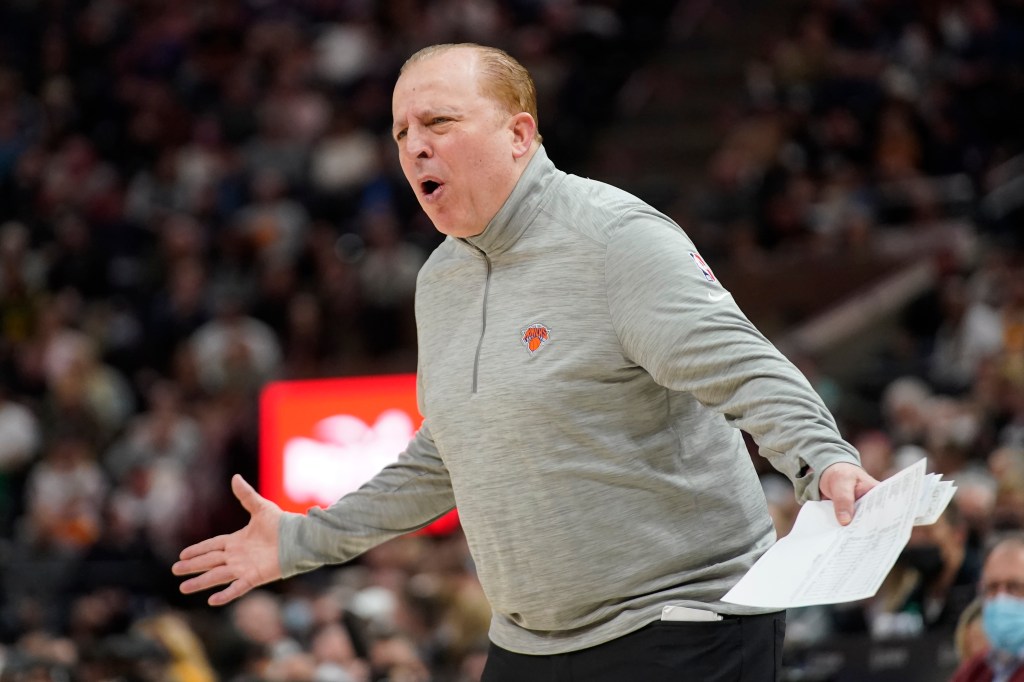 Tom Thibodeau reacts during the Knicks’ loss to the Jazz. AP

And the Knicks played well. They surged to an early 21-9 lead. In the third quarter, after falling behind 68-58 and looking like they were about to mail in the final 20 or so minutes, they unearthed a replica of what they used to be, of what they were thought to be in the summer, of what seemed possible when they were 5-1 in October and still 22-21 and in postseason position 3 ½ weeks ago.

Suddenly, the summertime blueprint was on full display, the best-laid plans in full bloom. The Jazz couldn’t score. The Jazz, in truth, could barely get a shot off. The Knicks scored 10 straight, 14 straight, 17 straight. Everyone was making shots: Julius Randle, RJ Barrett, Evan Fournier. By the time it was over it was a 24-2 run.

That 10-point deficit had become a 12-point lead. Against the Jazz. In Salt Lake City. Mitchell Robinson was playing the best game of his life — he’d wind up with 19 points and 21 rebounds — and if that was helped along by Gobert taking in the game in street clothes, it was still remarkable to watch him dominate long swaths of the games

And still deflating to see what happened next.

“What got us was the start of the fourth quarter,” Thibodeau said. “We need to take a hard look at that.” 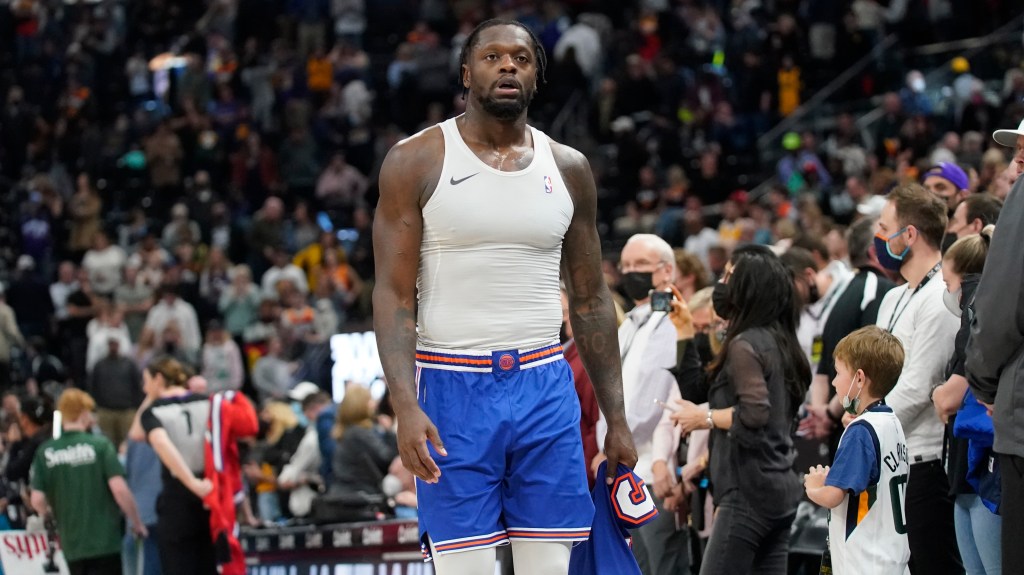 The Knicks have lately fallen into the trap of every underachieving team that isn’t quite a bottom-feeder. Every game there are stretches where you think: that’s what this is supposed to look like. Against the Lakers Saturday in Los Angeles, there was a breathtaking first half that yielded 71 points, then a stirring comeback at the end of regulation—all of it sabotaged by overtime.

And now this: a winnable game in the fourth quarter, a 50-50 game down the stretch. Last year’s Knicks would’ve had a puncher’s chance to hit the tape first. This year’s Knicks spend too much time punching themselves in the face. It can be both a small difference and a strong one.

“We could easily be 2-0 on this trip,” said Randle, who finished with a team-high 30 points and is finally starting to play with the consistency that was his hallmark all of last year. “We’re competing against teams trying to make the playoffs and competing for a championship. It’s tough.”

And it’s tough to watch. These Knicks were nobody’s definition of contenders at the season’s start but it was so hard to believe they’d be this close to playing out the string before Valentine’s Day. But here they are: as many losses already as all of last year. And struggling to grasp morsels of hope in the middle of a brutal stretch of games.

Zouma has had custody of his cats taken away, the mayor of London explodes