Knicks blown out as RJ Barrett limps off in final seconds

DENVER — This was the lowest moment of this western trip.

First, there was Nuggets’ guard Bones Hyland’s forearm to Kemba Walker that went uncalled and resulted in a celebratory 3-pointer. The Knicks’ aging point guard watched while on the deck and the embarrassing play highlighted an 83-point first half for the hosts.

Knicks coach Tom Thibodeau, following his curious pattern, still had RJ Barrett on the court with 18 seconds left, and their budding star took a bad step and sprained his ankle.

Barrett limped badly off the court and got treatment in the back for more than an hour, still limping around. He did not meet with reporters and his status for the rest of the trip is unknown.

Thibodeau said he put Barrett back into the contest with 3:50 left because the Knicks had cut a 27-point deficit to 13. He was wrong. The Knicks were down 15 when Barrett came back and down 15 when he departed, when newcomer Cam Reddish should’ve been in.

RJ Barrett, going up for a shot, had to limp off the court in the closing seconds of the Knicks’ 132-115 blowout loss to the Nuggets.NBAE via Getty Images

“The good thing he put some weight on his ankle so he was limping but he was walking,” Evan Fournier said. “Bad ankles you can’t put any weight on it. That’s not the case. It’s a day-to-day thing with ankles.”

Thibodeau was more curt on the matter. He said he spoke to Barrett briefly after the game and said the 21-year-old seemed OK.

“Coaches are looking at him,” Thibodeau said. “I don’t want to say anything until they look at him. He sat most of the fourth. We got it down to 13 and wanted to see if we could make a run.”

There was no miracle in the Mile High City. Fournier admitted the Utah-Denver back-to-back — because of the punishing altitude — is the toughest in the NBA. 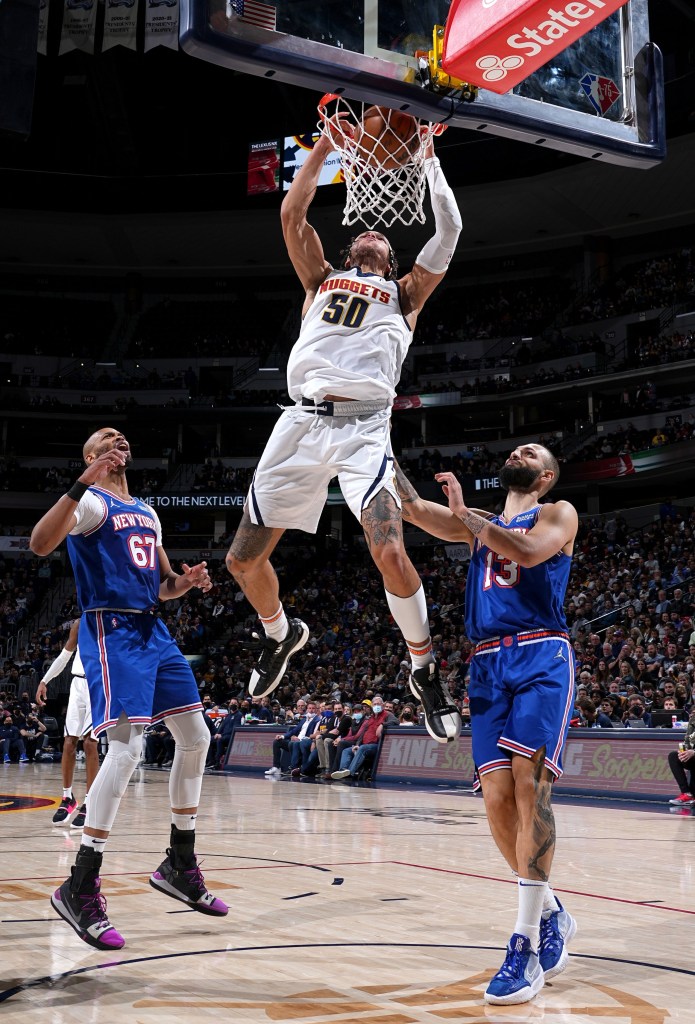 Julius Randle, who didn’t get taken out until there were 53 seconds to go, stood by his coach’s garbage-time decisions.

The most humiliating moment came late in the second quarter when Hyland (20 points) gave a forearm to Walker as the Nugget stepped back for a 3-pointer.

Walker hit the deck, flat on his rump, looking at the referee, laughing in disbelief when a whistle didn’t blow.

Hyland held the ball, peered at Walker, then at the rim and fired in a 3-pointer after which the Nuggets sharpshooter pointed his index finger right at Walker.

The Knicks were knocked out of their senses by the powerhouse Nuggets, knocked to the floor and fell to 0-3 on the trip. The Nuggets shot 31 free throws to 12 for the Knicks.

Hyland’s bucket gave the Nuggets a 66-34 lead. Bystander Randle, away from the play, threw his arms up in disbelief.

Walker, who scored two points in 22 minutes, was not made available for comment. Walker may be dealt at Thursday’s trade deadline.

After the Walker incident, Randle, who finished with 28 points, was in referee James Capers’ face for calling a non-shooting foul when he thought he was hit in the act of shooting. He looked to Thibodeau, signaling for him to ask for a replay review and the coach ignored the request.

It was a night of disrespect and not unexpected with their two centers — Mitchell Robinson and backup Nerlens Noel — injured.

They lost 31 games all last season in a 72-game schedule.

It was 83-60 at halftime — the highest point total in a half the Knicks have given up this season and second-highest they have allowed since the franchise was formed 75 years ago.

“We couldn’t stop anything,” Randle said.

The Knicks actually had a six-point lead in the first quarter with Randle coming out on fire. But the nuggets soon got past them. Randle ended the half by blowing a fast-break layup that led to an Aaron Gordon 3 in transition.

Jokic got smoking inside and the Nuggets started drilling 3-point shots off Knicks turnovers — one hidden interception by slumping Immanuel Quickley. Reddish, playing in Quentin Grimes’ injured absence, was a minus-15 in five minutes.

“Expectations were really high with the season they had last year,” Denver coach Mike Malone, a former Knicks assistant, said before the game. “And expectations are always hard, for any team. I know it’s been a weird year for the Knicks, guys in and out of the lineup. All that stuff. I can’t speak to that. You know Julius is still a really tough cover [and] RJ Barrett.”