The Welshman appeared to be noticeably leaner in training last week (Picture: Getty)

Gareth Bale has poked fun at suggestions he has lost muscle mass after Real Madrid fans were left shocked by a picture of the Welshman from training last week.

The 32-year-old has endured another injury-plagued campaign back at the Bernabeu, struggling with knee, calf and back issues as well as testing positive for coronavirus in December.

As a result, he has not played for Real since August, although he was an unused substitute in matches against Atletico Madrid and Elche in December and January respectively. 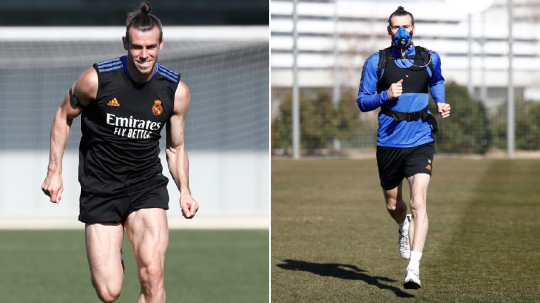 Last week, Madrid fans got a rare sight of a player who was once the most expensive signing ever and he appeared to be noticeably leaner than he was at the start of the season.

A side-by-side photo of Bale, as shown above, went viral on social media and compared his current physique to what he looked like during Real’s pre-season campaign in the summer of 2021, just six months ago.

‘At what point did Bale lose so much muscle mass? Only six months’ difference,’ tweeted one shocked Real supporter, with many similar comments.

Now Bale has finally addressed the photograph by uploading another angle from the same session, drawing a giant green arrow pointing at his now more prominent thigh muscle along with a ‘crying-laughing’ emoji.

The Welshman, who added only a ‘flexing muscle’ emoji as his caption, clearly feels he was photographed from an unflattering angle, while reports in Spain claim Real have zero concerns about Bale’s physique or fitness.

In fact, according to El Chiringuito journalist Edu Aguirre, the former Tottenham star excelled in the last Thursday’s training session – when the pictures were taken – and is the fittest player in the squad, with no other real player reaching his levels.

Real fans may get a chance to finally see Bale back in action on Thursday night in the Copa del Rey, with manager Carlo Ancelotti confirming that he is in contention to start against Athletic Bilbao.