Aubameyang made his debut for the Catalan club on Sunday (Picture: Getty Images)

Pierre-Emerick Aubameyang described wearing the Barcelona shirt for the first time as an ‘unbelievable feeling’ after making his debut for the club on Sunday.

The former Arsenal striker joined Barca on a free transfer after agreeing to a mutual termination of his Gunners contract.

Aubameyang was stripped of the club captaincy in December for his latest disciplinary breach and didn’t play another game for Mikel Arteta’s side after losing the armband. 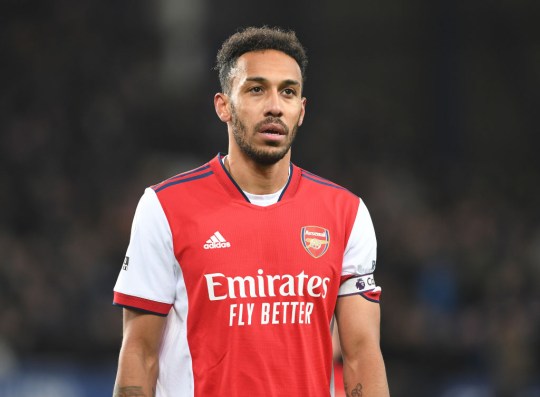 The striker had previously been exiled from the Arsenal squad (Picture: Getty Images)

On Sunday, the Gabon international made his first appearance for his new club after coming on as a second-half substitute as Xavi’s side beat Atletico Madrid 4-2 at Camp Nou.

Taking to Instagram after the game, Aubameyang wrote: ‘Wearing this jersey for the first time – what an unbelievable feeling!!!

‘Strong team performance and huge win for us today.’

During his presentation at Barcelona, ​​the 32-year-old revealed his ‘problem’ with former boss Arteta.

‘I think it was a problem just with him [Arteta]. I can’t really tell you much. He wasn’t happy and that was it. I can’t say anything else because that’s what happened. I wasn’t very happy and I’m better this way,’ said Aubameyang.

‘There were some complicated months. Sometimes football is like that. If I had to say something about this, I would say, on my behalf, I never wanted to do anything bad.

‘Now I have to put this behind me, that is in the past. I want to think about the present.’

Arsenal legend Martin Keown, meanwhile, is hoping Arteta doesn’t get a reputation for falling out with players after the Aubameyang situation.

‘Is this decision in the best interest of Arsenal football club? That’s all I’m looking at. There is no replacement that has come in for the striker. Arsenal are in a fight for fourth place and have an opportunity to do that.

‘What I don’t want also is the manager to get a reputation for falling out with players. I don’t know if another high profile manager has fallen out with so many players.’